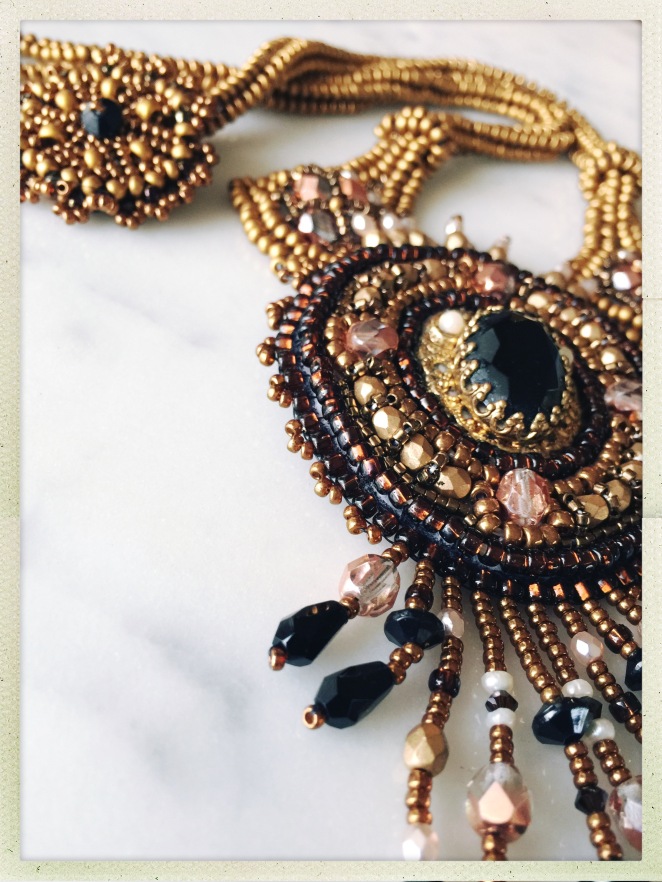 ‘He found her at home. There was a large fire burning on the hearth, and one could smell from far the fragrant reek of burning cedar and sandal wood. As for herself, she was busy at her loom, shooting her golden shuttle through the warp and singing beautifully.’ [The Odyssey]

How do you tell a story without words?

How do you chronicle a single moment—or epic, or saga—in time, when songs of the balladeer have faded, the nimble tongue has gone to the grave, and the ornately drawn parchment has crumbled to dust?

Think textiles. Spinning, weaving, and the art of story-telling have long been intertwined. Perhaps familiar metaphors are already springing to your mind; spin a tale, weave a tale, spin a yarn, hanging by a thread, tie up loose ends, leave them in stitches…many are the links within our language. Likely you can think of many more.

painting of Penelope at her loom by John W. Waterhouse

Think text and textile, and you have found the Latin verb connection texere, to weave.

From Greek epic—via faithful Penelope and the tormented Helen of Troy—to the Bayeux Tapestry that sought to chronicle the Battle of Hastings, to our favorite German/Slav fairy tales where ladies spin straw into gold, to the raw beauty of the Appalachian woven coverlet; women have been weaving and spinning a dizzying path through story and lore for centuries.

For me, much closer to home, my fascination with this motif relates back to Grandma and her quilt-making. The final stitching would be saved for sunny days, the quilt stretched out on a large frame—usually under the shade of the apple tree— while various aging, gossipy aunts took their turn at helping Grandma bind all the elements together, stitch by tiny stitch.

Margaret Kennedy, in her book The Outlaws on Parnassus, mentions, with a decided sigh in her narrative;

‘The epic heroes of the Homeric age dwindled into ‘he whose tale is told by our looms’. Tales told by looms deteriorate. The heroic gives way to the wondrous incident, the gaping marvel, to floods, fires, pirates, witches, cruel stepmothers, and visits to the moon.’

Kennedy’s lament is for the lost art of storytelling—more specifically, the lost credibility of storytelling as an art form—and its deterioration into mere diverting fairy tales. But, except for the ‘visits to the moon’, she might have been describing what my eager child’s ears listened to while Grandma and the aunts busied their hands at the quilt frame. I learned so much about the lives, loves, and indigestions of various family members during quilt making. Is that why I’m a story teller?

But this picture, and this story, is more Penelope than Aunt Winnie, in that I wove this necklace for remembrance. 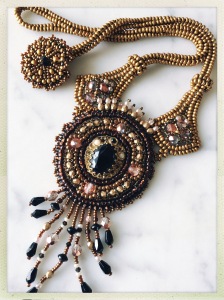 Last winter I lost a friend. She went suddenly. I was cheated of good-byes or anything like it that involved words.

So I wove. I haven’t worked a quilt since I was a little girl, but I still love to create textiles with beads and vintage baubles. So I wove, stitched, and embroidered the first thing that came to me to do. All the while I held a thousand unvoiced conversations with my sweet friend. A flimsy piece of fabric became my life raft for a few days of intensive silence. It slowly gained in weight and substance as I bejeweled, encrusted, cast upon it entire constellations of glittering angst.

I wove for remembrance, as did Penelope in the Iliad; wove as insistently as did Helen of Troy, sitting by her workbasket, lacing her wine with the sweet drug of forgetfulness.

I wove as did Millay’s Harpweaver, capturing a fantasy of sweet pathos.

Too tiny, really. Too much imagination, too much everything…and in the end what is this pretty bijoux of bright nothings? Remembrance.

“Did you think the lack of you wouldn’t matter?”

Weaving is story telling when words are not there.

She will know it was for her.