‘I write this sitting in the kitchen sink. That is, my feet are in it; the rest of me is on the draining-board, which I have padded with our dog’s blanket and the tea-cosy.’ 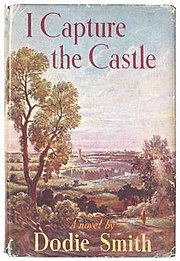 quote from I Capture the Castle, by Dodie Smith

This belated genusrosa post finds us in the kitchen. Yes—I know. We are usually sharing a walk in the garden together, talking about a good book. And I have a lot of garden walks for us to catch up on!

But today I’m in the kitchen, thinking about pumpkin bread.

Even so, something from a book is at the ready. Shall I leaf through Elizabeth David, or the sublime M.F.K.? Sad to say, I google the perfect recipe for pumpkin bread and fall down the pinterest rabbit hole for two catatonic hours; (cream cheese swirl or chocolate chunk?? baked in a jar for that homespun look or the perfect giveaway gingham loaf pan?)—

Then Cassandra Mortmain [I Capture the Castle] and her delicious six penny writing book comes to mind. Those creative, brilliant Mortmains had simple bread and margarine and eggs for tea.

‘How odd it is to remember that “tea” once meant afternoon tea to us—little cakes and thin bread-and-butter in the drawing-room. Now it is as solid a meal as we can scrape together, as it has to last us until breakfast…Stephen is lighting the lamp. In a second now, the rosy glow will have gone from the kitchen. But lamplight is beautiful, too.’

Suddenly it is dusk and E.B. White and his Dusk in Fierce Pajamas looms into view… Owen Johnson ‘with his chafing dish’ is never far from my thoughts as I’m scrolling through page after page of awesome wonderfulness and gorgeous autumn inspiration…

‘They are perfect little crystals of being–static, precious.’ [E.B. White]

For now, to celebrate the lovely fall season, one doesn’t just make pumpkin bread; one is expected to make pumpkin bread from specially molded bakeware that mimics the shape of pumpkins, then drizzle them with a delicately spiced sugar glaze that has been colored orange (to suggest the color of pumpkins, I suspect) and then they are to be served on pretty little plates that have been hand-painted with autumn leaves in all the appropriate colors that one associates with fall. Because it is in the fall, you see, that we have pumpkins.

I’m not sure if pinterest is enlivening to the imagination, or enervating to it. Has it replaced, not only imagination, but the actual doing? There are just a few doing, forty five million are watching, scrolling, and dreaming. Have we pin-terested ourselves into a state of catatonic ineptitude? (some day I will yes I will create that super cute jewelry organizer created with a vintage ironing board and two wooden candleholders—how could I not?)

I don’t want to lose my imagination. I think I know what season I’m in. I can still find my jewelry. I can even make jewelry.

‘All I know of her is that she appeared one night at dinner, her beauty set off by the lustre of artificial satin and the watery fire of aquamarine…’

Somehow, with the riches, variety, and opportunities of blogdom; I am just not writing. It’s not ‘the age thing’. I protest that notion. I write in my head constantly. And I still read constantly. But I am not writing. Pen to paper; fluid, articulate shapes appearing. Ideas forming, rushing upon one…

This lack of writing may not be bad for the world, per se, but it is not a situation I like for myself.

Cassandra Mortmain’s story is told through a series of notebooks; journals, if you will. First, there is the sixpenny book that symbolized the humble reality of her circumstances; yet she made the most of every glint of light on shabby taffeta. Her improving fortunes, as the novel builds, are suggested by the upgrades in her notebooks: the sixpenny book is followed by the ‘schilling book’, followed by the ‘two-guinea book’. She painstakingly teaches herself to write—like her father did, once—by faithfully recording ordinary life as it was. Of course there was nothing ordinary about the Mortmains. (That being said, if this were today, Rose and Topaz would have been the pinterest addicts, and Cassandra the free spirited boho who ran an animal shelter.)

My new resolve, to be celebrated over a glass of white wine and—as it turns out, no pumpkin bread at all but some yummy butternut squash hummus that I intend to eat right out of the container—is to simplify. No more separate blogs for separate interests. This blog will suffice.

I actually kinda love it here.

It’s been quirky and unexpected, and I never know what is going to get the writing juices flowing. It could be a chance encounter with a new book, an odd word, a storied photograph, a curious shimmer of light on my fruit bowl (think Somerset Maugham), a comparison of Homer and Barbara Cartland…(can it be done?? let’s find out!) …you get the idea. Or, as in this post, I return to mine some favorite material.

It always comes back to words for me, whatever the subject. Other words from capable pens that still ring with perfect pitch, and still thrill me, or perhaps my own stumbling toward something elusive I can’t define. We can’t allow ourselves be stifled by the sheer amount of brilliance or choices out there, or feelings of having to fit into a certain ‘category’.

‘Father says the desire for self-expression is pathetic.’ [Cassandra Mortmain]

Ignoring Mr. Mortmain for the moment–but we’ll come back to him later in another post–some of the poetry and favorite quotes, photography, will be moved over from my Pollyanna Press to here. In time. I might write a post about my jewelry making enterprises. On occasion. The only blog to keep her Queen Bee status is my Margery Sharp blog. She–and her writing–has been a happy preoccupation of mine for many years now. Margery deserves her own blog and shall have it.

The genusrosa theme will be switched to a minimalist magazine layout. Well…not too minimalist…that’s just not me. But the idea is to organize the subjects for my readers a bit more efficiently (without the aid of a vintage ironing board and candleholders), so you can pick and choose your way.

However, if you’re looking for the perfect pumpkin bread recipe, I suggest pinterest. If you’re not back in five hours, we’ll come looking for you with our flickering lanterns and beeswax candles. The curiously gentle, ethereally beautiful Topaz might even be there, wearing her black rubber rain boots.

‘Topaz came downstairs just then, in her black oilskins, sou’wester hat and rubber boots, looking as if she were going to man the lifeboat.’

I love the world of I Capture the Castle. It was beautiful, inconsistent, tender, contradictory, achingly sad, heartbreakingly funny. Like life. It was also a reminder that worlds can be created beyond our own. Worlds that are real, nourishing, inspiring, and lovely. But only if we write.

‘It was…autumn, very gentle and golden. I loved the quiet-coloured fields of stubble and the hazy water meadows. Rose doesn’t like the flat country but I always did—flat country seems to give the sky such a chance. One evening, when there was a lovely sunset, we got lost…’

Poetry reference also from I Capture the Castle:

‘Twould ring the bells of Heaven
The wildest peal for years,
If Parson lost his senses
And people came to theirs,
And he and they together
Knelt down with angry prayers
For tamed and shabby tigers
And dancing dogs and bears,
And wretched, blind pit ponies,
And little hunted hares.
[Ralph Hodgson]

A Garden for Allegra

Someday…a sequel for those girls!

© Rebecca Rose Cepeda, 2014 Unauthorized use and/or duplication of this material without permission from this blog’s author is prohibited. Accredited links to the site are permissible.
Loading Comments...
Comment
×