In 1932, Stella Gibbons published her first novel, Cold Comfort Farm. Well-educated, a trained journalist and professional writer for magazines, Gibbons wrote the novel on a lark. “Little did she know” it was to become a classic of satire. The book even took the prestigious Prix Etranger award, winning over the likes of writers Elizabeth Bowen and Rosamund Lehmann. In 1995 the movie, starring Kate Beckinsale as Flora Poste,(aka ‘Robert Poste’s child’) was released, thus introducing the phrase ‘the golden orb’ into our jargon. It became instant code-speak for purple, self-conscious, overwrought prose.

“It was winter, the grimmest day of the darkest hour of the year…The golden orb had almost disappeared behind the interlacing fingers of the hawthorne…”

As we pause reflectively, or not, on this the shortest of the year, the day when we cast the longest shadows, and look ahead to incrementally tiny increases of light slivers to cheer us along our path through winter, Stella Gibbons’ purposefully satirical prose comes to my mind.

Actually, this book has provided has provided a delightful sub-text for many of life’s passing moments. A winter solstice is no different.

But what about ‘the golden orb‘? Gibbons, though including a great deal of egregiously deranged passages in her comic masterpiece, as well as coining such choice new words as scranlet and mollocking, apparently did not make use of the expression ‘the golden orb’. If it exists it would be in an early British edition of her work, or perhaps an original manuscript. There is no such phrase in my Penguin paperback edition of Cold Comfort Farm.

A winter sun that ‘throbbed like a sallow lemon’, yes, but not ‘the golden orb’. 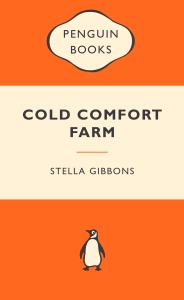 Thus we have to conclude that it came from the pen of a screenwriter. This, however, does come from the book:

‘….his huge body, rude as a wind-tortured thorn, was printed darkly against the thin mild flame of the declining winter sun that throbbed like a sallow lemon on the westering lip of Mockuncle Hill, and sent its pale, sharp rays into the kitchen through the open door. The brittle air, on which the fans of the trees were etched like ageing skeletons, seemed thronged by the bright, invisible ghosts of a million dead summers….’

Oh, Stella Gibbons did have some fun. It is also great fun for the reader. But in actual fact, the Flora Poste of the book and not the movie, was decidedly un-poetical. Definitely more down to earth, no nonsense, indomitably cheerful, and matter of fact. She has aspirations to be a novelist, yes, but only after she had lived a few years and ‘collected experience’.

Flora Poste liked things neat and tidy. Long-winded bursts of stream-of-consciousness experimentally verbose ‘flapdoodle’ was not to her taste. More particularly, not to the taste of Stella Gibbons. She liked Jane Austen, who, as she described her, was also neat and tidy. When it came to the archetypal ‘mad woman in the attic’ character, Flora Poste drew inspiration from reading the doings of serious-minded Fanny Price in Mansfield Park—considered Austen’s most difficult novel. As well, less archetypically, and definitely less Fanny Price, she drew heavily on the persuasive power of fashion and travel magazines in fixing the problem of what to do with Aunt Ada Doom–that mad woman in the attic of ‘I saw something nasty in the woodshed‘ fame.

‘The woodshed incident had twisted something in your child-brain seventy years ago. And seeing that it was because of that incident that you sat here ruling the roost and having five meals a day brought up to you as regularly as clockwork, it hadn’t been such a bad break for you, that day you saw something nasty in the woodshed.’

But as the writer prosaically remarks: ‘you can’t have a farm without sheds.‘

Stella Gibbons’ bouts of deliberately overwrought prose, styled for effect, is marked in the text with a preliminary row of asterisks. As she mentions in a helpful tip in the forward to the novel—the asterisks serve as a sort of Baedeker guide that might mark the laudatory places in a landscape; works of genius, as it were. Just so one knows where they are, and how to respond, in case they don’t recognize them immediately.

‘It is only because I have in mind all those thousands of persons, not unlike myself, who work in the vulgar and meaningless bustle of offices, shops and homes, and who are not always sure whether a sentence is Literature or whether it is just sheer flapdoodle, that I have adopted the method perfected by the late Herr Baedeker, and firmly marked what I consider the finer passages with one, two or three stars. In such a manner did the good man deal with cathedrals, hotels and paintings by men of genius. There seems no reason why it should not be applied to passages in novels. It ought to help the reviewers, too.’ Stella Gibbons

So clever of her to give us clues to when the really good parts are coming, so that we don’t miss them.

And then there was the delightful character, Mr. Mybug. (played brilliantly by Stephen Fry in the movie)

‘The farmhouse itself no longer looked like a beast about to spring. (Not that it ever had, to her, for she was not in the habit of thinking that things looked exactly like other things which were as different from them in appearance as it was possible to be.) But it had looked dirty and miserable and depressing, and when Mr. Mybug had once remarked that it looked like a beast about to spring, Flora had simply not had the heart to contradict him.’

Gibbons had a bit of fun skewering the Bloomsbury set; ‘you…who are so adept at the lovely polishing of every grave and lucent phrase…’

Mr. Mybug, temporarily in love with Flora, is a classic Bloomsbury intellectual who lives intensely, as Stella Gibbons sees him.

“There’s a quality in you…” said Mr. Mybug, staring at her and waving his fingers. “Remote, somehow, and nymph-like…oddly unawakened. I should like to write a novel about you and call it Virginal.”

“Do, if it passes the time for you,” said Flora, “and now I must really go and write some letters, I am afraid. Good-bye.”

Ah, yes, Letters. I have to go write some, too. I have considerably less time to do so, because of that whole golden orb thing, disappearing so rapidly behind the interlacing fingers of the wind tortured hawthorn. Soon the impalpable emanations and tortured ferment of spring will be upon us, and then what? ‘Nature’s fecund blessing‘?… By the way, that’s not in the book, either. I think Stephen Fry made it up.

We’ll let Virginia Woolf give us spring, and her watercolor impressions of ‘stunted yellow cherries‘….

‘Every time he lunches out on Sunday—at dinner parties and tea parties—there will be this same shock—horror—discomfort—then pleasure, for he draws into him at every step as he walks by the river such steady certainty, such reassurance from all sides, the trees bowing, the grey spires soft in the blue, voices blowing and seeming suspended in the air, the springy air of May, the elastic air with its particles—chestnut bloom, pollen, whatever it is that gives the May air its potency, blurring the trees, gumming the buds, daubing the green. And the river too runs past, not at flood, nor swiftly, but cloying the oar that dips in it and drops white drops from the blade, swimming green and deep over the bowed rushes, as if lavishly caressing them.  Where they moored their boat the trees showered down, so that their topmost leaves trailed in the ripples and the green wedge that lay in the water being made of leaves shifted in leaf-breadths as the real leaves shifted. Now there was a shiver of wind—instantly an edge of sky; and as Durrant ate cherries he dropped the stunted yellow cherries through the green wedge of leaves, their stalks twinkling as they wriggled in and out, and sometimes one half-bitten cherry would go down red into the green….’ Jacob’s Room

The good news is that tomorrow—lived intensely— will be even longer than today. Or perhaps it will only seem so. 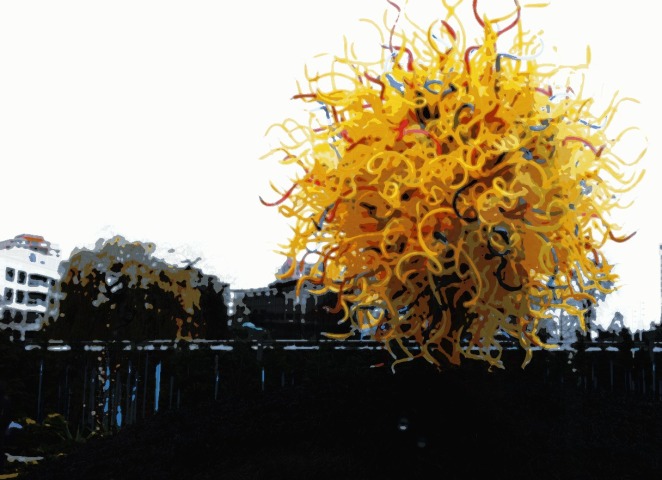 (in response to the weekly photo challenge ‘yellow’…which got me thinking about purple prose, and golden orbs. Oh, and glass artist ***Dale Chihuly, the genius who created this awesome yellow glass sculpture.)