“Eat your fruitals and vegetals”
Said my mother
Never

As a Curious Word devotee, every so often I like to consult H.W. Fowler for a good hand-slapping, (as it were). Since ‘vegetal’ is considered, as a word, ‘obsolete’, an ‘archaism’, and no one can slice and dice those as effectively as Fowler does in his handbook of Modern English Usage, let’s see what he has to say on the subject.

…'[An archaism] is dangerous except in the hands of an experienced writer who can trust his sense of congruity; archaic words thrust into a commonplace context to redeem its ordinariness are an abomination.’

Dangerous like this vegetal projectile, being hurled at Benjamin Bunny?

There you have it, folks. Vegetals are dangerous. An abomination. As a word, that is. What Fowler would have thought of today’s veg, veggie, and emojis to represent the concept of vegetable, we can only guess, but we could likely head over to his category of Incongruous Vocabulary for a good idea.

It is interesting to note the good H.W. includes words as ‘belike’…. ‘albeit’…. and ‘breakfast’, in his listing of abominative, puerilistic, and innovatively deplorable archaisms.

I love this book, and always pick up a copy when I see one. They make great gifts for word-minded friends. And need I add, my overly officious spell check has been affectionately dubbed ‘Fowler‘.

more fruitals than vegetals here, but I liked the colors

On the scale of annoyances, a word like ‘irksome’ falls fairly low in intensity. For example, the shrill yapping of your neighbor’s Pomeranian is irksome. But if your Rottweiler goes after the Pomeranian and mauls it, the situation has just escalated to well beyond irksome. Sadly, we will not need our dictionaries to describe what next occurs.

In the world of fiction, if you want to get lost in a book where nothing really really bad happens, and fluffy lap dogs live forever in a fantasy village preserved in something like a snow dome, you couldn’t do better than the world of Barsetshire. (created by Anthony Trollope, but enchantingly enlarged upon by Angela Thirkell.) 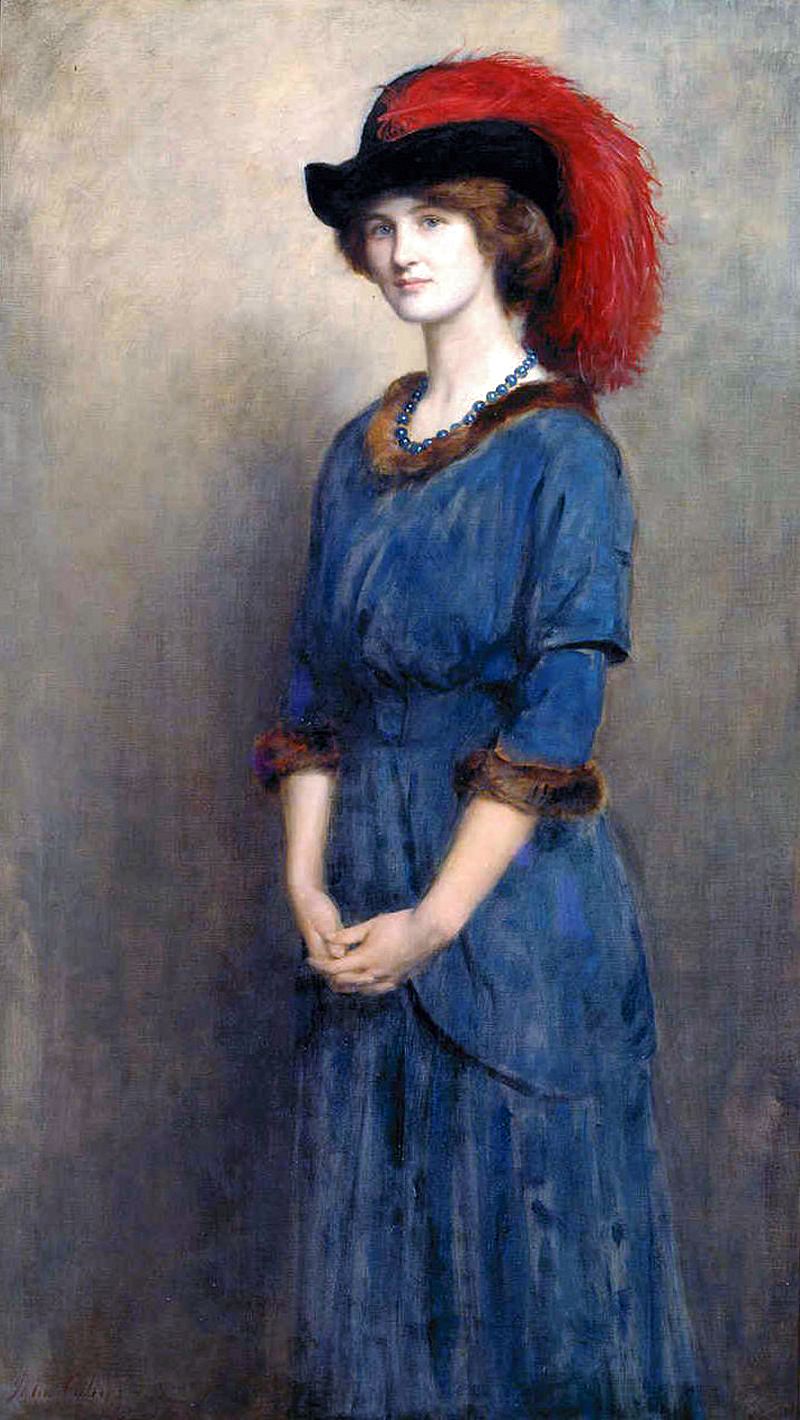 image of Angela Thirkell via wiki

Yet, unfortunately for some readers, it might seem appropriate that Angela Thirkell conveniently has the ‘irk’ built right into her name.

It is true, she can be a self-indulgent writer, and take the reader on many lengthy pointless divigations of trivialities, she can take a tiresomely plaintive tone, (particularly in her later novels) and some of her sentences are fantastically long.

Though at times plowing through these exasperating moments, I still enjoy her novels on the whole, and even look forward to re-reading them. I also enjoy her long sentences, and view some of the more well-crafted ones as a work of art.

So what is the secret to her success? Why does she remain popular even to readers of today, with our short attention spans, ‘get to the point’ mentality, and our dismissal of happy endings? Why have even publishers like Virago have reprinted some of her cosy, domestic, feminine fiction in recent months?

Well, you won’t find a definitive answer here. (but here you will) I can only give you one reader’s opinion—that would be me—when I say that there is a certain ebullient charm in Thirkell’s writing style that is like a cork that keeps bobbing to the surface. Just when you think you are about to be weighed down by too many characters, too many side trips into past histories, too many lukewarm romances culminating in too many marriages….then you hit ‘a spot’, an aha moment in the narrative that delights beyond comprehension.

That’s when you realize that Angela Thirkell is writing from a depth and erudition that makes her completely unique. I prefer not to compare her with other writers, be it Jane Austen or Barbara Pym. Angela Thirkell is simply in a class by herself.  As a bonus, she can be hilariously funny.

my little stash of Thirkells

These Barsetshire stories are beloved for a reason; they are deeply layered, and there are gems studded throughout that truly speak to a culture, a time period, a set of values, that is worth dipping into for study, and/or escape entertainment.

(For brevity I am neatly side-stepping here decades of Thirkell Circle clubs, online discussion groups, reams of scholarly papers written on this subject, all related to everything from the simple enjoyment of her novels as fantasy to an unraveling of the scholarly sub-text embedded within; but a wonderful resource to learn more about the world of Barsetshire is angelathirkell.org)

Thirkell knew the audience she was writing for, and she knew it was a commercially successful ‘line’ of products she had introduced. She was a savvy woman, and understood what was expected of ‘a lady novelist’. True—tired and cranky at times, opinionated beyond all doubt, but it is well to remember she was a single parent who worked for a living. She felt a responsibility to provide for her sons, and she kept to deadlines through some pretty severe conditions. She lived through a period of British history that was anything but light and charming, yet she was able to rise above that and create, on the whole, light, charming stories that showed a positive view of a community that came together for good.

That is, I believe, one of the secrets to the charm of the Barsetshire series. Thirkell created an ensemble cast; returning characters that people were eager to read about, and see where their lives would take them. The secret to a successful ensemble cast—in movies, literature, musicals—is that the sum is greater than the parts. The snug community of Barsetshire, abuzz with tea parties and knitting circles, with snappy little red roadsters and lumbering donkey carts navigating the village lanes, came together when it really counted. Whatever class, snobbery, or educational levels that existed as a reality of the times, there is a collective spirit of warmth she created that invites one in.

If you love literary, cultural, poetic allusions–and love tracking them down–there are enough peppered throughout Thirkell’s output to keep you well fed for years. You could almost form the groundwork of a classics education if you just followed every thread of allusion stranded through her narratives.

And speaking of sparkling threads stranded through a work… Since I think in terms of analogy, my attempt to sum up the charm of Barsetshire makes me think of a scarf.

Some women buy a scarf because they like the color, because it is pretty, it feels good on, and it keeps their neck warm. Done.

Other women buy a scarf because it is interesting and comes with a ‘story’. It may be an odd color of puce that is in direct conflict with their skin tone, but that is of small consideration, and they wear it, regardless, because it is a unique and fabulous piece. The wool comes from adorable llamas that graze on a rare kind of grass in the Peruvian Andes, and then, after hard-working little women who sing folk songs while they work spin the wool, it is dyed with a concoction of tea leaves that can only grow at certain elevations. The tea leaves need proper fermentating for several months in order to achieve that odd puce color that makes you look slightly yellow when you wear it. (don’t ask me how I know this…)

That is sort of a Barsetshire magic. Thirkell’s own story is an interesting one, and explains the strangely dimensional aspect to her charming world, the sense that you are looking at something generations beyond what she might have effortlessly chronicled as inconsequential. No time for a biography here, (shall I invoke wiki?) but Thirkell’s childhood history is extensive in its atmosphere of poetry, classics, scholarship, and art. Knowing what sort of conversation must have flowed around her breakfast table, as she grew up, explains a great deal about how rich Angela Thirkell’s interior world must have been.

Just one example: her beloved grandfather was Edward Burne-Jones; a famous artist who created a shimmering, romantic world of his own.

Love Among the Ruins…. a beautiful poem by Robert Browning

Also a famous painting by Burne Jones, and later to be the title of one of Angela Thirkell’s novels.

Happily, Thirkell’s novels have had many reprints. I would direct you to Kate McDonald’s blog for more information, including some compelling reasons to add this author to your stash on the groaning TBR pile, and here to the Virago website, as well.

A writer’s toolbox needs to be diverse, and hyperbole can have a valuable place there. But it is one of those tools—like that fetchingly useful ‘ratcheting socket wrench, with indexable sockets’ that can feel a bit clumsy in the hand. We take it out for special needs, have difficulty pronouncing it, and use it rarely. (Never would we hit anyone over the head with it.)

Use of hyperbole creates an exaggerated effect. It comes from a Greek word that means, in essence, an over-scattering of seed. (Overkill might be modern usage.)

It is meant to be a teaching or memorization aid, and should serve to fix the desired object—scene, character, bit of wisdom— in the reader’s mind.

My current reading interest is the genre known as the ‘English country house novel’. Recently, while reading the article by Lev Grossman on the topic, I came across his brilliant use of hyperbole:

An effective and engaging use of hyperbole; one that fixed his point firmly in my mind.

The antithesis to hyperbole can be found in one simple sentence. Another example of how the right use of words, in this case the sparing use, can fix a scene, character, or idea in one’s mind. Margery Sharp is a master at scene setting and character sketching with just a few strokes of crisp, spare prose.

“Miriam Oleson entered. That was what she had been trained to do at her finishing school on the Boulevard St. Germain, and she never forgot.”  —Rhododendron Pie, by Margery Sharp

We learn so much about Miriam Oleson from this simple strand of words. Like hyperbole, deconstructed.

Hyperbole begs:
“Let’s fly to the moon and seize
some string theory cheese…”

Okay, I’ll put my ratcheting sock wrench with indexable sockets back in the toolbox now.

More about the novels of Margery Sharp here.

Wise you are
November
your leafy drifts
cluster at the base
of endless trees
they mark where time
has passed
and will pass again
This silken canopy
you, November
will change into
a dark elixir
falling once again
to another dimension
where roots can draw strength
from your richness
Ah November sky
you have opened
new portals onto mystery
it is at your strong bidding that I see
( your steely skies insistent)
these branching traceries
of stark silhouette
promise green days and renewal
like breezes, a sweet return
to where now I stand
yearning, gazing up
at November
and wisdom

Something about fall puts me in a Rossetti mood, or Pre-Raphaelite in general… ‘Smoke…’

(image made using canva and a Rossetti landscape)